A quick search on www.wunderground.com last night revealed a couple scary red swirls out in the Pacific Ocean. One of them is parked over the northern part of the country in the form of a tropical storm, less than a week after a typhoon hit the same area. We have been in the Philippines less than three years, and already we have seen three massive typhoons that have all but wiped entire regions off the map, at a frighteningly close distance.

The first typhoon hit the northern part of our island just 10 days after we moved here, and we were still finding our bearings, but so many from our area responded. Two years ago, Typhoon Bopha (known locally as Pablo) scraped past us here in Davao, but obliterated our neighbors literally just up the road. Dan, along with another missionary in Davao, teamed up with the Philippines Red Cross and Philippines Army and entered the zone less than 48 hours after the storm hit. They spent the next several months helping, not only initially with medical and first response, but later with rehab and reconstruction in the area. In the process, the large group of local missionaries that formed to help destroyed several vehicles from gross overloading and overuse on the unimproved roads. Along with many other issues, we had to have the body reattached to the frame, and a different time, the frame to the springs.  That combined with countless “extra” trips to haul supplies in smaller vehicles gave Dan a vision for the future. We needed a vehicle that could handle the roads, carry people, and carry mass amounts of relief goods. Being able to respond quickly is vital. Help is needed immediately, and it often takes several days or weeks for it to arrive from the outside.  There is always a gap to be filled, and that’s where us being local comes in.

We will be responding as soon as it is safe to go into the affected areas with a primary focus (24 hrs) of first aid, rescue, initial relief deliveries and connecting with the Incident Command.  Working within their system, our second mission (48 hrs) is to help get the medical clinics running by putting in emergency lighting and plugs, and creating a dry work environment.  Beyond that, we do whatever IC needs us to do.  Once outside help arrives we will be able to use the truck to move them and their resources where needed.

Dan began to plug his idea to several people who helped with Pablo relief, and they all thought it was a nice idea, but “how did we know this wasn’t just a one time freak event”? Well, it was a “two time freak event”, based on the typhoon the year before. Then, last November, the infamous Typhoon Yolanda decimated the Philippines, answering the question of “will it happen again?”.

I won’t get into the politics of climate change, global warming, etc…but the climate here is changing. The storms are dropping lower and lower in the country, and regardless of why, it’s happening, period. I read an article a few weeks ago listing the countries most vulnerable to the current climate change/weather patterns, and we were Number One. Not exactly something to celebrate, but we need to stay prepared. We are already prepping for this season, and The disaster response truck is still in the front of our minds. We have the opportunity to purchase one from another organization who was using it while building their ministry compound. It’s a Mitsubishi Canter, 4×4  Doublecab or as we in America call it a crew cab. With it’s 12 ft bed and dual back tires it can haul a lot of supplies though a lot of rough country.  You know, over the river and through the woods…or jungle… 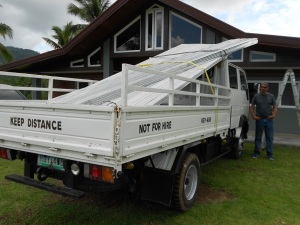 So what if we buy this thing, and we have a typhoon free season? Praise God! Will it just sit and rust? Heck no…there are always events going on where it could be used. Fires and floods are a normal event right here, locally, where supplies and people need to be transported.  Construction is always, always, always happening, here and on neighboring islands. Unfortunately, there is always something to rebuild.   When Dan shares his vision of the truck with other ministries it is often met with “Could you haul…with it?” We would love to be able to answer, “Yes! When and where?”. We would love for you to partner with us, to make this dream a reality!

Our ministry,  Hope Created, is a connected to www.thecause.org. Through The Cause, individuals can donate money, and even receive a tax return receipt! If you would like to help us reach out goal of $14,000 for this vehicle, please visit The Cause’s website! It sounds like a lot, OK, it is a lot, but as a team, we can help reach people when they are at their lowest, and need a hand up! Thanks for your support!

2 thoughts on “Porsche? Ferrari? What’s Your Dream Vehicle? Here’s Ours…”